Mass mobilization during the French Revolutionary and Napoleonic Wars, unparalleled in scale and duration, had a significant impact on British musical life. The drastic expansion of the regular army and proliferation of auxiliary corps prompted unprecedented investment in martial musical ensembles, expanding opportunities for ordinary men and boys to acquire instrumental skills while providing all levels of society with greater access to concerted entertainment. Military units of all shapes and sizes scrambled to source appropriate instruments and uniforms, engage competent teachers and identify promising players. Regular and militia regiments combed prisoner-of-war camps for interned black soldiers and sailors willing to take up Turkish percussion instruments while discharged drummers and trumpeters found their musical expertise in high demand among volunteer corps desperate for qualified instructors. Musical instrument makers quickly took advantage of the commercial opportunities created by the expansion of the military market, offering all-inclusive package deals to colonels eager to outfit budding ensembles with the requisite equipment.

All this effort and investment had a tangible musical impact, of course, training a generation of instrumentalists from plebeian backgrounds, but the Napoleonic-era ‘martial musical project’ also left a significant material legacy. Stray military musical instruments, some boasting dubious Waterloo provenances, can still be found in local and regimental museums, country houses, and parish churches across the UK. 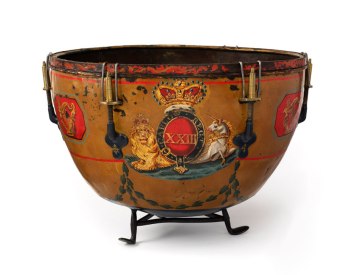 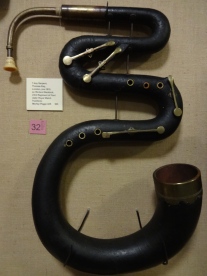 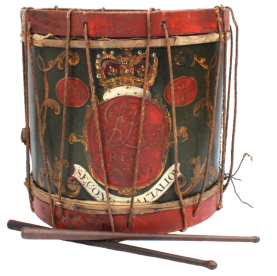 Although Ordnance-issue drums and bugles were usually returned to government following demobilization, many privately-purchased instruments (and some state-procured ones too) remained at large, offered for sale on the second-hand market at cut-rate prices or gifted to their players at disbandment.[1] The Doncaster Volunteer Infantry’s subscribers presented the unit’s musical instruments to the town corporation in 1814, depositing them in the Mansion House, the town’s preeminent venue for balls and civic entertainments, “as an encouragement for the continuance of a military band.”[2] Some martial instrumentalists proved reluctant to surrender the tools of their trade: a drummer who resigned from the Loyal Chelmsford Volunteers in 1808 was given permission to retain “his book of fife tunes” but proved dilatory in returning a fife belonging to the corps.[3] Seven Herefordshire Local Militia bandsmen petitioned their commanding officer “to make us a present” of the regimental instruments in 1816, pledging that “a band will be always ready in the town of Leominster for any occasion” should their request be granted.[4] Indeed, numerous Volunteer and Local Militia bands continued performing for decades after the dissolution of their corps, enlivening public festivals, railway openings and friendly society feast-days. The survival of Napoleonic-era musical impedimenta also facilitated future revivals: The Western Times described the “resurrection” of the band of the Loyal Exminster Hundred Volunteers for Queen Victoria’s coronation celebrations, reporting that the “resuscitated veterans”, having dusted off their old instruments and rebranded themselves as the Powderham Band, would “henceforth” be giving weekly open-air concerts.[5] Moreover, the continued availability of instruments purchased in wartime facilitated the creation of new post-war musical ensembles, lessening the need for prohibitive capital outlays. The Salisbury Volunteer Infantry, raised in response to the agrarian Swing Riots in 1831, secured a loan of the mothballed instruments and music books of the dormant 3rd Wiltshire Local Militia to equip their newly-formed band.[6] 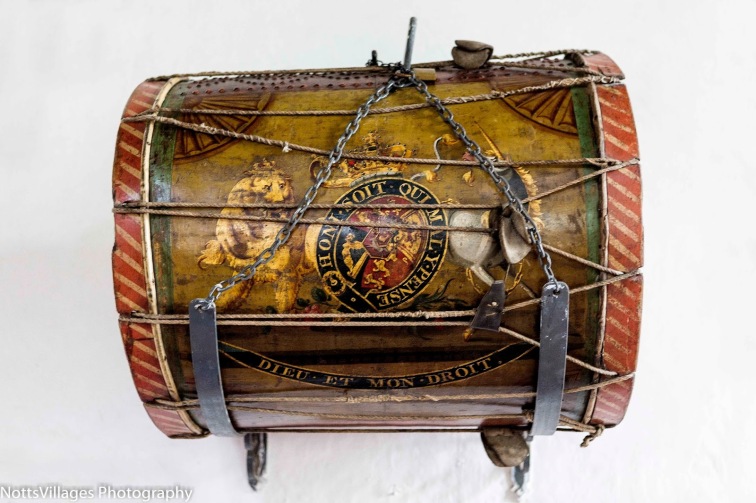 Some cast-off martial instruments became valued community assets, pressed into service for decades after 1815. One bass drum allegedly used at Waterloo (more likely a relic of a local auxiliary corps) was subsequently employed by a local band at friendly society feast days in Orston, Nottinghamshire.[7] The drum changed hands for “a few shillings” at a 1940s village sale and is now displayed in Orston’s parish church.[8] A well-documented bass drum acquired for the Marquess of Blandford’s early-nineteenth-century private “military band”, although not strictly a regimental instrument, illustrates the potential repurposing of martial musical hardware. According to a Victorian label, the drum was later beat at Berkshire Yeomanry parades, temperance processions and public celebrations in Reading marking the passage of the Great Reform Act, the coronation of Queen Victoria and the end of the Crimean War.[9] Earsplitting and easy to play, cast-off military bass drums (most still sporting the Royal Arms) were widely adopted by nineteenth-century street musicians and twinned with pan pipes to form one-man bands. Punch and Judy performers routinely employed the same combination of instruments “to call the people together” before beginning their puppet shows.[10]

Punch’s Showmen, from Mayhew’s London Labour and the London Poor (1861)

Former military musicians continued using the skills and instruments they had acquired in wartime long after Waterloo. An erstwhile bandsman of the Stockton-on-Tees Volunteers was wont to take down his “old regimental bassoon” and indulge visitors with fireside solos excerpted from military marches while ex-Life Guards trumpeter James Wild brandished a French trumpet captured at Waterloo in post-war Rochdale and “often played upon it”, “making music wherever he went.”[11] John Whitworth, a retired bugler and drum-major of the 7th Royal Fusiliers, delighted friends by playing soldiers’ ballads on “his Peninsula bugle” and relating tall tales of swashbuckling service, improbably claiming to have once been court-martialled for refusing to sound the retreat.[12] James Guidney, a drum-major discharged from the 1st Royal Veteran Battalion in 1814, became a notorious Birmingham cure-all salesman but also dabbled as a freelance musical performer, advertising his services as a drummer for “any public parties of pleasure” at end of his 1862 autobiography.[13] Guidney’s military side drum, the interior still emblazoned with his name and rank in chalk, is now owned by Toronto Museum Services. 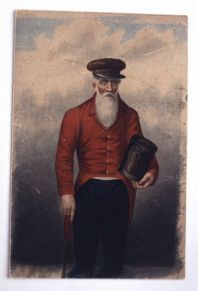 Ex-military instruments were also employed to mobilize support for political reform or even rebellion. A “ragged little boy” raised a ruckus with the North Cork Militia’s captured bass drum in rebel-occupied Wexford during the 1798 Irish uprising while aspiring revolutionaries in Barnsley in 1820 paid a visit to former Staincross Local Militia drummer Joseph Archer to commandeer his “old volunteer drum”, beating it to herald the onset of armed insurrection.[14] The aptly-named Tom Bluett, an ex-military bugler, sounded his instrument to summon Manchester-area parliamentary reformers to pre-dawn drill sessions in the weeks before Peterloo.[15] The battered bell of Bluett’s horn, now held by Gallery Oldham, still sports a broad arrow, a tell-tale marker of government property. 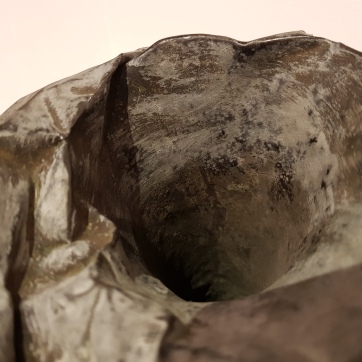 Of course, not all ex-military instruments remained in use following the return of peace. Most drums and bugles displayed in churches and country houses were intended as silent trophies memorializing their former corps, while other cast-off instruments presumably gathered dust in cupboards, attics and storerooms. Three sets of bagpipes belonging to the 1/95th Rifles’ Highland Company, according to the granddaughter of its commander, Captain Alexander Cameron, passed much of the Victorian era in a horsehair ottoman.[16] Overburdened Irish ratepayers grumbled about the cost of hiring storerooms for mothballed militia equipment into the 1840s, singling out bulky bass drums for particular pique.[17] Some instruments were surely junked or converted to non-musical use: one Napoleonic-era bass drum of the Royal Radnorshire Militia narrowly escaped conversion into a coal-box.[18] A grotesque 1861 short story published in The Musical World derived inspiration from the neglect of such martial musical impedimenta, describing a superannuated ex-volunteer musician terrorized by his anthropomorphic enchanted bassoon, which somersaulted from its mahogany case after decades of imprisonment to taunt its owner while endlessly performing “The Duke of York’s March”.[19]

But the material remnants of the Napoleonic-era martial musical project are of course not limited to instruments. Irish journalist and antiquarian John G.A. Prim rescued the headdress, coatee and pantaloons of a Kilkenny Militia bandsman from the ignominious fate of adorning a garden scarecrow, presenting these relics to the Royal Historical and Archaeological Association of Ireland in 1872.[20] The uniform now takes pride of place at the National Museum of Ireland’s “Soldiers and Chiefs” military history exhibition in Dublin’s Collins (formerly Royal) Barracks.

Even in the twenty-first century, artefacts of Napoleonic-era martial music-making continue to surface in unexpected places. For example, Kevin Gordon, the author of a Sussex local history blog, discovered a fascinating Volunteer fife with unique engravings while sorting through a box of odds and ends at Seaford Town Council in 2009. This unassuming instrument was purchased by the Seaford companies of the Cinque Ports Volunteers[21] from John Cramer, a “celebrated military musical instrument-maker” in London whose son served as bandmaster of the 88th Foot.[22] Several inscriptions are interspersed between the embouchure hole, maker’s mark and finger holes: “R.L.”, the date 1800, a depiction of a military side drum and the words “SEAFORD CP VOLUNTEERS – GOD SAVE THE KING”. Remarkably, the other side of the fife is engraved with a musical scale, the letter names of notes, and their corresponding fingerings – an instructional aid carved into the instrument itself.

The fife was almost certainly owned by Richard Lower, the only drummer with the initials “R.L.” serving in the Seaford companies of the Cinque Ports Volunteers according to muster rolls held at the UK National Archives.[23] Unfortunately, it has so far proved impossible to ascertain Lower’s age or background, but something can be gleaned of his service with the part-time Volunteers. In the thirty-one days beginning on 25 January 1800, for example, Lower participated in all four Friday drill sessions (January 31 and February 7, 14 and 21), receiving one shilling for each from government.

Although the Volunteers ultimately never faced down a cross-Channel invasion, Lower’s service at drills, reviews and patriotic celebrations probably honed his instrumental skills over time, perhaps eventually rendering his carved aide-memoire redundant. Of course, many questions about his fife (now on permanent display at Seaford Town Council) remain unanswered. It would be interesting to know, for instance, whether the scales were carved by or at the behest of Lower himself or if they were ordered by an attentive instructor. Did the addition of “God Save the King” – a reminder of the patriotic underpinnings of the Volunteer movement – reflect the enthusiastic handiwork of a loyal fifer or the punctiliousness of an overzealous officer? It is possible that some of the engravings were simply intended to mark the fife as regimental property to deter Lower from absconding with the instrument.

Whether Lower was much of a fifer, or ever employed his martial musical training in later life, cannot now be ascertained. Yet other boys and young men who first cut their teeth in volunteer corps went on to become musical instructors, brass band trainers, composers and even opera singers. As contemporaries recognized, mass mobilization during the French Revolutionary and Napoleonic Wars enriched nineteenth-century musical culture, prompting a crescendo of instrumental activity to which the Seaford fife, among other such relics, bears compelling if now silent witness.

The author gratefully acknowledges Richard Warren, Rob Griffith, Sean Baggaley and Chris Laverton for sharing some of the photographs included above.